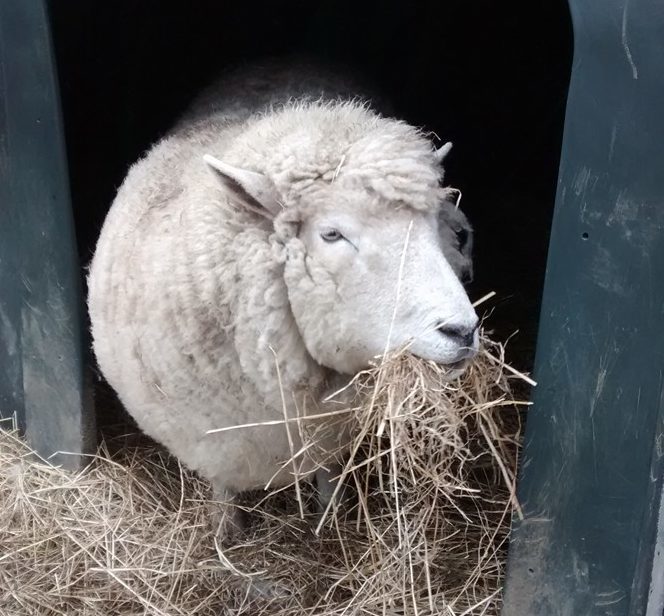 Molly is a five year old Southdown cross who came to Sheep Ahoy Animal Rescue at the same time as Lola and they remain best friends to this day.

Molly was a healthy lamb who was initially raised with her mother but who unfortunately got separated from her by the farmer at a couple of weeks old and ended up being raised by hand.  This is how she became friends with Lola.

Always aloof, Molly keeps herself to herself and often prefers to graze than to come and see us.  However, if Molly wants a fuss you know about it as she will hoof you until you give her attention!

Molly has the most beautiful eyes which look like she is wearing eye liner and that is generally the way that most people identify her especially as Lola and her are so similar in build.

Molly and Lola are the greatest of friends and are never far apart and are often seen grazing or laying together as a pair.  Lola has limited sight due to an eye infection that she had as a lamb and Molly appears to act as her guide especially when they are in the long grass which Lola cannot see above due to her short legs … bless her

Poor Molly did suffer from an injured shoulder last year and required veterinary treatment but has recovered well.  The consensus is that cheeky Rolo used Molly as a step to put his front legs on to reach the leaves on the trees and injured Molly in the process.

All the Gang love oatie biscuit treats and Molly makes sure she gets her share too.  This is quite a difficult task as Molly has short legs and ends up being smothered by the taller sheep like Delilah and Rolo, however, she pushes through and of course we make sure she gets her bikkies or any other treat that she likes.