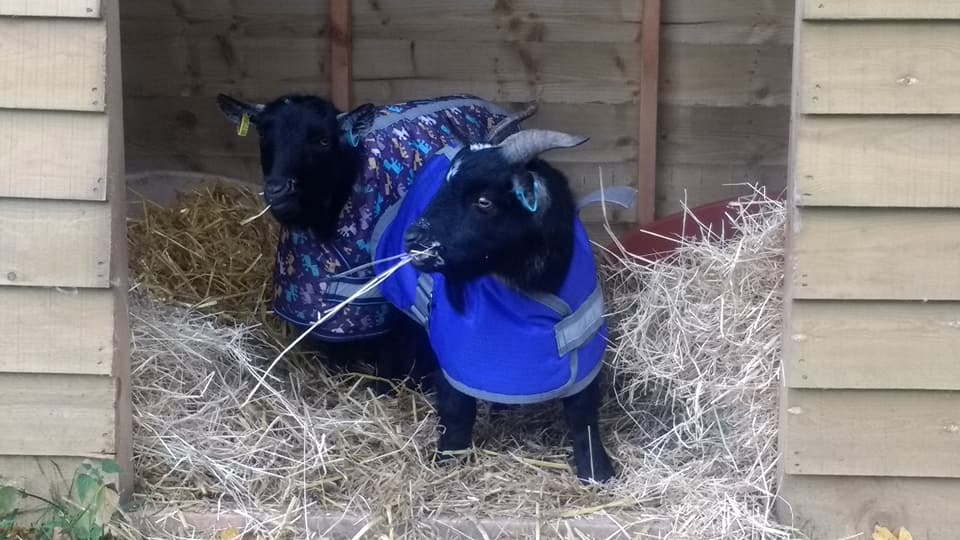 Bill & Ben are pygmy goat boys who came to Sheep Ahoy Animal Rescue in October 2016.  They were bought at a local livestock market as two black lambs who were in a pen on their own amongst rows and rows of sheep.  However, it soon became apparent that they weren’t lambs at all but two petrified little pygmy goat boys.  Unfortunately, the original sanctuary could not have goats and so we were asked to home them and we went straight to the market to pick them up.

The boys were taken to the vet for a check up and it became apparent that they were both infested with lice which had caused Bill’s coat to fall out.  Immediate treatment was given to both the boys which had to be continued due to the bad infestation of lice they had.  Eventually the treatment was successful and Bill’s coat grew back.

Bill & Ben were also entire males and we decided to have them both castrated just in case we homed any female goats in the future.  The procedure went well and the boys recovered quickly.

The two goats are inseparable and gain a lot of comfort from each other which has been very important as they were so frightened when they first came to us.  It was thought that they were both adults but Ben is now larger than Bill and so must have been a youngster with Bill being the adult.

Ben is a sweet, curious boy and is now much more confident around us and will allow us to adjust his coat if it slips or we need to change it for a different one.  Bill is the bossy one and will try and chase Ben off food so we have to keep an eye out at feed time to ensure Ben gets his portion.