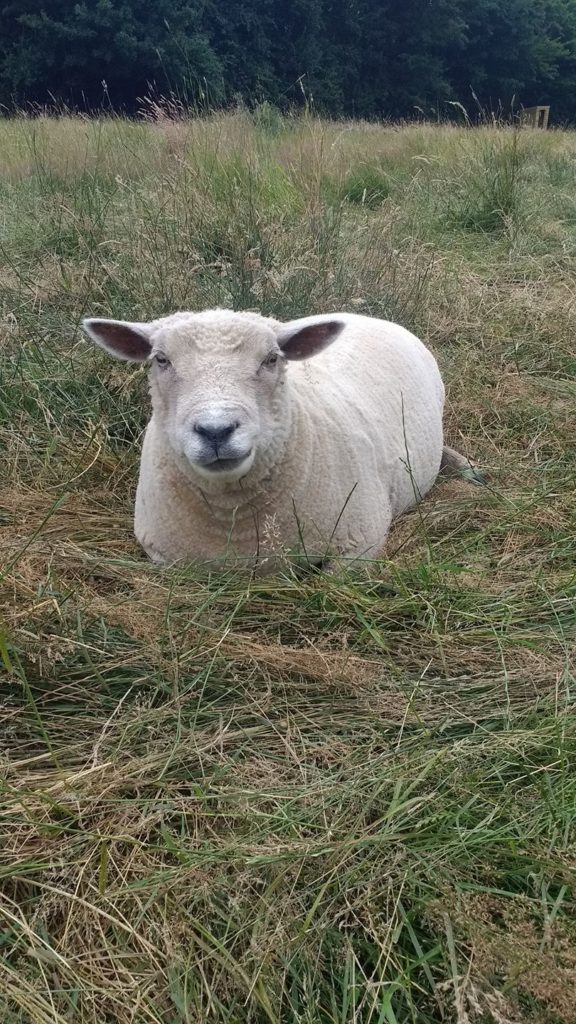 Lola is a five year old Southdown cross who is probably the quietest of Oli’s Gang.

Lola was the weakest of triplets and unfortunately her mother did not bother with her so Lola became very cold and weak quite quickly.  She was taken indoors by the lady that bred her and put by the fire to keep her warm and was bottle fed.  Although attempts were made to get Lola’s mother to accept her back afterwards the ewe was not having it and so we were asked if we could raise her at our home.

Lola was a very weak lamb and Emma kept her in a box in her bedroom for the first few nights until Lola became stronger.  The trigger to Lola sleeping downstairs was the night that she jumped out of her box and onto Emma’s head! For an easy time Emma just let her sleep on her pillow for the rest of the night … bless.

Lola had a very bad upset tummy and became dehydrated so the vet gave her fluids under her skin and a glucose/electrolyte solution to have in her bottle instead of milk.  This approach worked and within a day Lola was bouncing about and screaming for her milk!

We then noticed that Lola had a couple of white patches in her eyes which turned out to be infection so she was prescribed eye drops.  This little lamb was amazing when the drops were put in her eyes and just accepted what was being done.  Luckily the infection cleared up but we do think that her eyesight has been affected as she often appears to squint at you and is not always the first to recognise what is happening so we have to appreciate this and give her extra time to adjust.

There was another orphan called Molly and as the lambs grew they were put together and became great friends.  We couldn’t take one without the other so of course we had both and they joined Oli and Delilah and all became known as Oli’s Gang